Last I left you, we had surfaced on a stable landing that gives us ground for the suggestibility that there is indeed a Power that has moulded our universe into existence. The English language provides a label for this Power, “god”. Throughout history we have tried time and time again to grasp the fundamentals and categorize the attributes of a god. Whether it was in Ancient Greece with Zeus, Hera, Apollo, Athena or the Roman gods Fortuna, Jupiter, Mercury…How about in Ancient Egypt with the worshiping of the Pharaohs. In todays world there are so many variations of what and who god is, Budda, Vinshnu, Waheguru, Allah, Jesus…So, it seems fair to say that in this unjust world humans seek refuge and belief in a higher power because the alternative is just too sad to bare. To walk through life not believing that there will be complete justice in the end. In a world that is rattled by war, crime and corruption, humans need to have faith that those individuals that wronged them will get what they deserve in the end. Even for those that do not necessarily believe in a specific entity use statements of comfort like “what goes around, comes back around” and their belief in karma to provide them with the solace their soul so desperately seeks.
Logically, a god should be an entity more powerful than a human, the last time I checked as humans we cannot even find a cure for cancer let alone dare profess that a measly human was responsible for the creation of the solar systems and everything it encompasses. Another attribute should be that this “god” is all knowing, since he will be the one that punishes those that harm us. So, linearly that should mean that he is powerful, at least powerful enough to generate a suitable punishment. Looking out of my window at the docks that lay beneath me ever so peacefully in the water, hearing the birds’ song waft in through the open window, I cannot help, but see that this god must be beautiful. Beautiful because he is responsible for all the beauty that surrounds us. From the beauty and resilience of the oceans, to the opaque, serene moon, to the warmth of the sun that we associate with “good, happy” days. To the timely professionalism of the sun as it does not fail to show up and set and rise again.
Therefore, how do we decide with all these different beliefs in who god is, how do we choose which one is “the one”. Out of all the various religions out there, there is one, one that speaks of science, science that during its start there was no means to uncover. Science, that we are only beginning to discover the validity of. This religion was revealed over 1435 years ago. It was communicated to humankind through a book and a man, a man that was illiterate and a book that held the most intellectual and profound poetry ever known to mankind. This book that spoke of science so specific it stands to validate its authenticity. A book that divulged that when two natural bodies of water meet the two with different densities, temperatures and salinity they will never interpenetrate. To take a completely disparate example, human embryonic development. 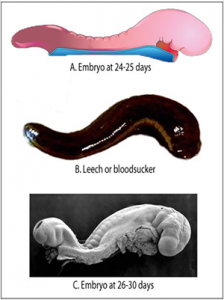 It is in this book that this development was communicated first. It begins with with the word “Alaaqah” which through interpretation to English has three definitions: a leech, a suspended element and a blood clot. Through modern science it has been upheld that the human embryo does indeed bare resemblance to the marginal appearance of a leech. This embryo also receives its nourshiment similarly to the way a leech does by feeding on the mother’s blood. The suspended element refers to the next stage the way the embryo dangles in the womb. Then, the embryo adopts the appearance of a blood clot due to the ample amount of blood it holds. Next, the book articulates that the “mudghah” stage which is transliterated into chewed substance. The markings left by teeth resemble the somites on the back of the embryo. Professor Emeritus Keith L. Moore is one of the most prominent scientists in the fields of anatomy and embryology, he is also the author of “The Developing Human”, a book which has been translated into eight different languages. Through his research he has found what was mentioned in this book to be absolutely accurate. Professor Moore once said, “He could not have known such details because he was an illiterate man with absolutely no scientific training.”